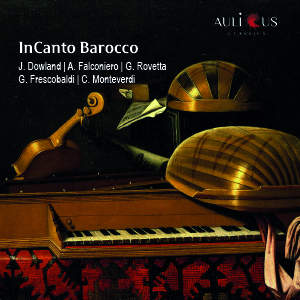 Suave Melodia. The nuances are from the beginning of the 17th century.

The heart of the present recording project is made up of a selection of pieces that can be traced back to the so-called "second practice", the compositional method affirmed at the beginning of the seventeenth century that put the wording in a prominent position with respect to music: most of these compositions are in fact taken from the collection "Scherzi Musicali" by Claudio Monteverdi. To these are added some of the most best known songs composed by contemporary composers such as Giovanni Rovetta, Andrea Falconiero, Girolamo Frescobaldi and John Dowland, all sharing extremely popular themes in the collective imagination of the period, such as Love, Religion and Death, often connected to one another. The project has been completed with some instrumental compositions, which witness the first collections of songs played that were sent to be printed in Italy in the mid-seventeenth century. The performance of each piece is enriched by a constant dialogue between voices and instruments, a dialogue within which ample space is left to free improvisation, characterized, according to the use of the period, by the practice of diminutions.