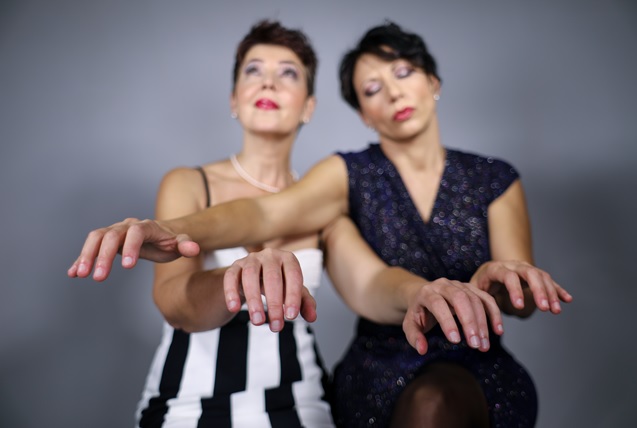 Inspired by the Greek word for “hand”, the name DuoKeira also echoes that of Chiron, the mythical centaur whose expertise in both arts and sciences combined the rational with the intuitive aspects of nature. If Chiron knew how to combine rigor in reasoning with spontaneity of feeling, Michela Chiara Borghese and Sabrina De Carlo offer performances which joyously fuse strict discipline, and openness to vital impulses.

Formed in 2008, DuoKeira is a partnership between two pianists both passionate about chamber music but very different from each other in temperament and by training. Among the many figures that have been formative influences for Michela Chiara are Russian school pianists Zyna Rychlewska (Wroglav, Poland), Konstantin Bogino (International Academy of Portsmouth, and Rocco Filippini (National Academy of Santa Cecilia, Rome); she has been also a member of the Orchestra Giovanile of Fiesole. Sabrina trained first in the Neapolitan school, studying under – among others - Michele Campanella at the Chigiana Academy. During her years in the United States she studied under Lois Shapiro, receiving her Master’s degree in piano performance from the Longy School of Music in Cambridge (MA) and her Artist Diploma degree from Brandeis University in Waltham (MA). The special qualities Michela brings to the duo’s music are absolute precision, a capacity to sustain strong sound with unfailing stamina and a rhythmic drive that never falters. Complementary to these are Sabrina’s melodic elegance, sense of timing and imaginative spacing, her unceasing quest for quality of sound, and her loyalty to the authentic spirit of the chosen composers.

In numerous concerts given in Italy and elsewhere – in Maputo, Paris, Rouen, Oslo, Boston, Waltham (Mass.), Providence and at Carnegie Hall in New York,– Michela Chiara and Sabrina have repeatedly experimented their artistic and cultural aspiration to renew the performance canons of chamber music while complying strictly with the demands of the classical tradition. A clear example of this came with the release of their first album (a second is in the process of being prepared), “Giochi di piano a Quattro mani”, which was broadcast by Vatican Radio and by the Italian national pubic radio channel, Radio Rai Tre. In 2013 they performed on Euroradio in the series “I Concerti del Quirinale”, broadcast live from the Paolina Chapel in the Italian Presidential Palace.

Recognition of their distinctive achievement came in 2010, when at the 19th edition of the "IBLA Grand Prize World Music Competition” DuoKeira was awarded the prize for the Most Distinguished Performance in the competition and received special commendation for its executions of works by Samuel Barber and Darius Milhaud. In November 2016 they were invited by UNESCO to take part with artists and philosophers from all over the world in the “Nuit de la philosophie” in Paris, and in December of the following year were among the winners of the Global Music Awards, and received the "Silver Medal Winners – Outstanding Achievement" for their execution of Samuel Barber’s "Souvenirs".

In many of the aforementioned occasions DuoKeira has been appreciated and rewarded for its innovative programs that set classics composed specifically for this ensemble alongside transcriptions of orchestral pieces and works rarely performed, often by living composers.

Michela Chiara and Sabrina enjoy creating occasions which bring music into creative dialogue with other artistic and cultural forms. In 2015 and again in 2016 they organized at the Villa Torlonia Theater in Rome a festival dedicated specifically to the repertoire for piano duos. The duo opened the first edition of VTPR with a premier performance of Samuel Barber’s“Fantasy for two pianos, which was sponsored by the International Center for American Music and the Capricorn Society of Paris. They also performed with artists from the National Academy of Santa Cecilia and the Rome Opera. For the second edition DuoKeira, offered three highly acclaimed performances “Danza con 20 dita!, “il giardino incantato” and “Sogno di una notte di mezza estate”. Both editions. involved protagonists from many backgrounds: poets, actors, dancers, video makers, even astronomists.

Michela Chiara and Sabrina also cultivate their own individual passions. Michela Chiara works with the Department of Education of Rome’s La Sapienza University, where she took part in a doctoral research project on José Antonio Abreu and El Sistema. Sabrina is practically involved in music education and dissemination of music experience, teaching in public Italian conservatories and co-conducting the amateur choir of the roman neighborhood where she lives (Quadracoro). In this as in other respects the complex singularity of their diverse experience gives rise to a vivid and constantly-evolving musical dialogue.