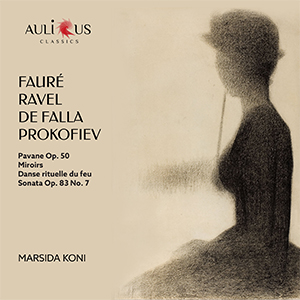 Miroirs (Mirrors) apparently they are clearly descriptive pieces, inspired by motifs taken from reality: the nocturnal butterflies in Noctuelles, the birds lost in a forest in Oiseaux tristes, the seascapes in Une barque sur l'Océan, the nights of Spain in Alborada del Gracioso and finally the festive sound of bells in La vallée des cloches. But it is only a deception: Ravel's piano writing is, deep down, metaphysical, abstract, mysterious: a sound painting that, instead of approaching us painfully, distances us from every epiphany of reality. The Prokof'ev's pianism, like Ravel's, responds to a purely abstract sound research: the oscillation between dissonance and consonance in the first movement, the absolute purity of singing in the central movement, the obsessively percussive character of the piano writing in the final one. The piano transcription of the so-called Danza del fuoco, isolated from its narrative context, succeeds only in part in giving back the garish richness of timbre and colours of De Falla's orchestra. And it is resolved in a magnetic and attractive virtuoso piece, but fatally far from the sound seductions of the orchestral version. Despite being a youthful page, the Pavane highlights the more mature traits of Fauré's style: the taste for modal harmonies, the wide and relaxed scope of the thematic procession, the taste for soft and swaying melodic profiles.