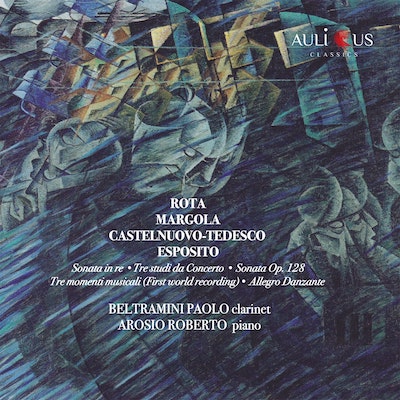 The clarinet is one of the musical instruments closest to the human voice. Its capability to modulate its sound with intense expressivity conquered many of the greatest composers of all times, who dedicated some of their most unforgettable melodies to its mellow sound. This trait survived the political, historical and aesthetical turmoil of the twentieth century. The pieces recorded in this album bear witness to the fascination for the clarinet’s cantabile even in the most tragical times (such as the year 1945) or in the midst of the avantgardes’ deconstructionism.

Nino Rota is best known as a composer of film music, and particularly for his cooperation with Federico Fellini. Film music allowed him to express his lyrical, playful, romantic, and ironic veins, free from the constraints of serialist diktats. His vocation for a communicative and narrative kind of music emerges in his Sonata (1945), where cantabile and sardonic elements are found, and in the merry and charming Allegro danzante, where repetition is turned into fanciful freedom.

Similar to Rota, also Castelnuovo-Tedesco wrote many film scores, and, again like Rota, he spent a considerable part of his life in the States. Just as Rota’s Sonata, also Castelnuovo-Tedesco’s was written in the fateful year 1945: the composer, of Jewish descent, had been forced to leave Italy for America. In this piece, Neo-Classical and Neo-Romantic elements intertwine. Every one of the four movements is very characterized: the broad melodies of the opening movement, the Scherzo’s lively rhythmic element, the Lullaby’s contemplative traits and the folklike, enthralling Rondo alla Napolitana build up a long but continuously captivating Sonata.

The horrors of World War II marked Franco Margola’s life as well; the composer was interned in a German Lager towards the end of the war. His Tre studi da concerto, originally labelled Tre pezzi, were written in 1971 and premiered the following year by Luciano Antonioli and Bruno Canino. Contemporaneous critics appreciated the clarity of their language and the composer’s boldness in resisting the sirens of experimentalism for experimentalism’s sake.

A similar refusal to submit to what a contemporary composer “had” to write characterizes the output of Ernesto Esposito as well. The youngest among the composers represented here, he taught for years at the Conservatory of Milan; the pianist of this album was among his students. If Castelnuovo-Tedesco had been close to Luigi Pirandello and cooperated with him, Esposito was in friendly terms with another Nobel Prize for literature, Salvatore Quasimodo, whose lyrics he set to music. His Momenti musicali, with their diverse atmospheres, demonstrate once more the flexibility of the clarinet and of its fascinating sound.