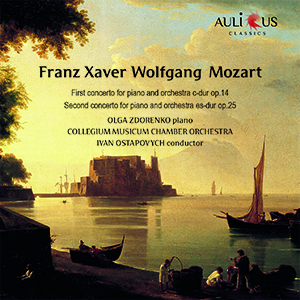 In 2018, two concerts for piano and orchestra composed by Franz Xaver Wolfgang Mozart - the great Wolfgang Amadeus Mozart's son, who lived for  many years in Lamberg (Lviv), now Ukrainian city - were the heart of a great worldwide music project: a CD, recorded by the PRIMROSE MUSIC record label. The album soon gained interest around the world. Recently, it was exposed at the Mozarteum, in the heart of Salzburg (Austria). It is a pleasure that the performer (soloist) is a well-known Ukrainian pianist, Olga Zdorenko, who graduated in Moscow, and now resides in Italy (Rome). The piano part is particularly virtuoso and the dizzying passages reflect the taste of that historical period (Vienna '800). There is a certain stylistic difference between the two concerts, due to the distance of their composition, 35-40 years apart. The first, in C major, is perfectly Baroque, enriched by a brilliant and virtuoso technique. The second, in Eb major, shows the signs of the beginning of Romanticism, especially in the second movement.