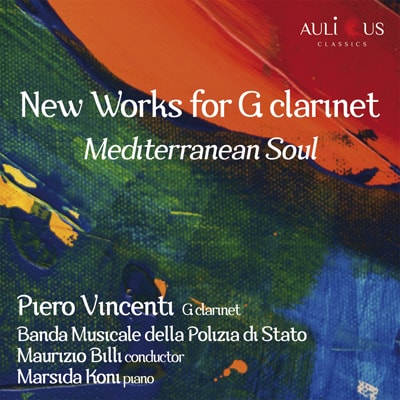 New Music for G Clarinet is a unique and original album for several reasons, extremely significant both from a musical and cultural point of view. As shown in the title, the main instrument is the G Clarinet, also known as Turkish Clarinet. It was born and developed in the Balkans and almost exclusively associated to the ethnic and jazz music of these lands. Inevitably, Western culture experienced Balkan sounds, melodies and rhythms (which were unrelated to the music of its own belonging) through the Mediterranean entrances, first among them the southern Italian coasts. New Music for G Clarinet is the first and only work currently recorded in which it can be listened and appreciated a G clarinet interpreting almost totally original music, with an unknown timbre. Piero Vincenti is one of the few western clarinetists devoted to the study and promotion of the G clarinet. This work is also testimony to the birth of the first repertoire of cultured music for this instrument, characterized by a unique timbre, which includes pieces for solo clarinet, duo with piano and soloist in wind orchestra.

The clarinet family comes in a number of different shapes and sizes, from the standard instrument in B flat, and its stable-mate in A, the bass clarinet with its bent-up bell rather like a saxophone, and the small E flat instrument, with its distinctively shriller sound and higher range, heard, for example, in Berlioz’s Symphonie Fantastique, and Ravel’s Boléro. However, there are still almost as many clarinets in other keys, whose use is far more specific, almost to the point of some becoming virtually obsolete. The clarinet in D, for example, slightly larger than the E flat instrument, is called for in Richard Strauss’s Till Eulenspiegel, although in practice its part is often transposed for the more readily-available E flat clarinet. Delve further and you will see the alto clarinet in E flat and the so-named basset horn in F, both adopting the bass-clarinet shape, with the latter instrument a particular favourite of Mozart.

Initially you will not find much mention of the clarinet in G, which features exclusively on this new CD by leading Italian clarinet virtuoso, Piero Vincenti. The instrument extends the sounding range of the B flat clarinet from D below Middle C down to the B below, and while it doesn’t adopt the alternative shape of the alto and bass clarinets, it is noticeably longer than the basic B flat version. While it offers three extra notes at the bottom, its sound is substantially richer than the B flat version right across the range, whereas the difference between the B flat and A clarinets is far more subtle.

It’s fortuitous that each piece on the CD speaks for itself musically and doesn’t need any further description in the sleeve-notes – because there isn’t any. Apart from a few sentences about the G clarinet and the kind of music it is normally associated with, the one and only other thing to emerge about the CD is that nine ‘tracks’ out of twelve have been written for, and dedicated to Vincenti – this should more accurately be nine ‘works’, since two pieces involve more than one movement and track. Given that virtually all the composers are unfamiliar names, it would have seemed more appropriate to provide some relevant information here, rather than extensive biographies for all the performers. Equally unusual is the fact that, while the CD emanates from Italy, the booklet is in English only.

The CD opens with Yiddish Clarinet, cast very much in the style of a Liszt Hungarian Rhapsody – a slow introduction, that immediately presents us with the richness of the G clarinet’s lowest register, followed by the obligatory fast section. Within a few bars of Vincenti joining the wind band accompaniment – here courtesy of the Banda Musicale della Polizia di Stato, formed in 1928 – it is abundantly clear that he is as much at home in this style, firmly couched in the folk idiom, as he is elsewhere in purely Western repertoire. He exploits the lovely tone colour of the instrument while articulating the trickiest of figurations, often taken at breakneck speed. Composer, teacher and conductor, Marco Pontini, has crafted an effective, if perhaps just a tad overlong and repetitive piece, that will surely elicit the same response when auditioning the CD at home, as happened, possibly spontaneously, in the recording studio. You have been warned.

Elegia is a haunting minor-key slow waltz by one of the former Soviet Union’s leading composers and a member of the so-called Armenian ‘Mighty Handful’, Arno Babajainian. Originally a piano solo, it is heard here in an arrangement for clarinet and piano. Vincenti is joined by Albanian-born pianist Marsida Koni whose debut CD of Albanian Piano Music I had great pleasure in reviewing back in November 2018. Koni has that enviable ability to make any piano sound good even if the instrument is somewhat short on tone to start with, as this one seems to be. She also appears a most sympathetic accompanist, allowing the music to breath according to Vincenti’s delivery of the main melodic line. They are, in fact, a husband and wife team, so perhaps there is an added empathy between them as performers.

Vidrieras follows on in the same key but is totally different in character – a lilting bossa nova by Italian composer Claudio De Siena, again for clarinet and piano. It is full of sultry Italian expression, which the duo captures to perfection – a simple, yet ideal piece to show off the capabilities of this particular clarinet, all in a laid-back, yet taut ensemble. Adagio is another little gem, this time from the pen of Italian composer and conductor Michele Mangani, originally for B flat clarinet and piano, but here transposed down a tone to suit the special tonal quality of the G instrument. Very much in the realms of easy listening or film music, it’s here given without unnecessary affectation, making but few demands on the listener. Tuning can be slightly problematical with the G clarinet, especially in the bottom register, but Vincenti is always very much on top of this.

Paganiniana by Hungarian clarinettist and teacher Béla Kovács is yet another set of theme and variations on Paganini’s Caprice No 24, with a short introduction added to the original. As with all such re-workings of Paganini’s original, Kovács skilfully manipulates the thematic material with considerable invention, where the virtuoso element is never far away, all of which Vincenti, ably supported by Koni, despatches with real élan. In Piccolo Angelo – ‘Little Angel’, by Italian clarinettist Vincenzo Correnti, Vincenti delivers the eminently melancholic melodic line, with impressive breath control that avoids breaking up any of the long phrases unnecessarily.

Next up is a further offering from Michele Mangani, his short, four-movement Jewish Suite, for clarinet and piano, where the second movement – Shalom Chaverim – is probably the best-known melody. Italian clarinettist and composer Manuele Filoso provides the next track, Cantabile, an expansively melodic number that again might have come straight out of the movies. It’s just a pity here that the piano sound is somewhat muffled in the lower middle register despite Koni’s constant attempts to counteract this.

Then follows a second offering from the pen of Béla Kovács, his Hommage à Bach, which in fact is one of nine similar Hommages to different composers he wrote for solo clarinet. A slow introduction leads into a quick movement where Vincenti’s breath control, effective use of dynamics and flawless articulation attest to his superb technique, now approached more from the classical standpoint. No doubt like the other Hommages in Kovács’s collection, the work is pure pastiche but occasionally reveals the Hungarian composer’s hand, such as the odd little chromatic triplet figure Kovács slips in, almost unnoticed – altogether another excellent example of the unique capabilities of the G clarinet.

Vie del sud by Italian jazz-clarinettist and teacher Giovanni Mattaliano is also for solo clarinet and is a quasi-improvised piece with a Latin feel. The title can be translated as ‘Southern Streets’, and perhaps the composer had in mind the often narrow, winding, and circuitous streets of Southern Italy, with his similarly meandering, and slightly amorphous melodic line. Rather like the first track on the CD, it could also do with a little judicious pruning and might then hold listeners’ attention somewhat more readily. Kovács provides the penultimate track on the CD, Sholem-Alekhem, Rov Feidman in a version for clarinet and piano. This is by far the best example of typical Jewish Klezmer music on the CD. Once the slow introduction is dispensed with, Vincenti really goes to town with all the characteristic clarinet sounds and gestures germane to the style, as the G clarinet once more comes into its own. Koni’s as ever sure-footed accompaniment again provides ideal support for all the pyrotechnics from the clarinet – great to listen to if you ever need just cheering up.

The final work on the CD is the three-movement Anima Mediterranea by Italian composer and horn-player, Donato Semeraro, which again involves the wind band. Once more the mood is very much a Balkan/Klezmer mix, with the opening ‘Allegro moderato’ making typical use of additive rhythms. The time signature is shown as a conventional 9/8, which is normally grouped 3+3+3 quavers, or eighth-notes – but here Semeraro prefers the grouping 2+2+2+3. Despite a certain lack of clarity and immediacy in the recording itself, particularly from the drum section, conductor Maurizio Billi maintains a taut ensemble, managing to keep in step throughout. The second movement – ‘Lento Poetico’ – paints a nostalgic, perhaps moonlit scene to start with, which becomes more agitated, before the calm of the opening resumes. The finale, marked ‘Allegro’, straightaway sets up a typical ‘oom-pah, oom-pah’ beat that, with some minor rhythmic variants, leads into a middle section which brings to mind echoes of Zorba’s Dance, as the obligatory increase in tempo ensues. A short cadenza from the soloist, which includes an interesting technical effect or two, picks up the tempo as the work ends on a definite high. There is a minor glitch in the booklet and the track list on the CD, where the number for Track 15 appears beside the composer’s name. It needs to be one line lower, as does the numbering for tracks 16 and 17 respectively.

This CD really appeals for a number of different reasons. Firstly it gives us the opportunity to hear a particular instrument, which some less-well-informed online sources have all but written off. It contains a well-balanced mix of genres and instrumental resources, which never pall, even if just a couple of items seem a tad over-long considering their musical content. But throughout there is the consummate skill of Piero Vincenti, who plays with great enthusiasm when the music demands, but equally with deep insight in those tracks of a more expressive and romantic nature. I hope this CD will encourage more players to take up the G clarinet and more composers to write for it. It does have a special sound and tone-colour. There is clearly more to it than just Klezmer music, however foot-tapping and entertaining this most surely is – altogether then, a CD that is both informative and specific on one level but also most entertaining and good fun to boot.